The 125cc is quite an interesting segment in the Indian market. The segment is targeted by both first time motorcycle buyers and people who are upgrading from the 100cc segment. There are many options in the 125cc that you can go for and here are the top 10 best 125cc bikes choices that you can get. Best bikes list. 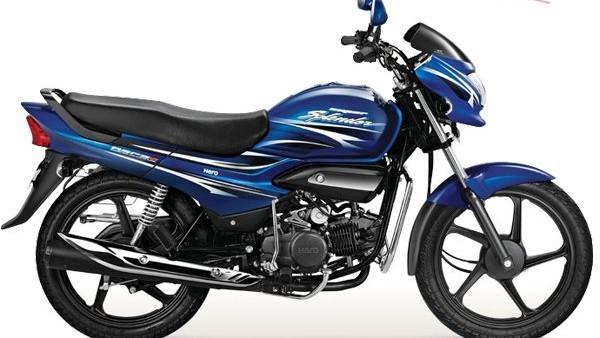 Hero motocorp has been a known name in the entry-level bike segment. Hero is top selling manufacturer when it comes to the entry-level segment. Taking the legacy of the Splendor forward, Hero introduced the 125cc version of the bike and named it as Super Splendor. The bike gets premium and bold body graphics that makes it quite attractive. Hero offers all-black paint job to the engine, forks and the alloy wheels adding a sense premiumness to it.

The bike is powered by 124.7cc, single-cylinder engine that has a maximum output of 9 Bhp and a peak torque of 10.3 Nm. The transmission is 4-speed system. It returns a maximum fuel efficiency of 75 km/l, which is quite good in the segment. The Super Splendor gets telescopic front forks and twin spring based shock absorbers in the rear. We can also see a good amount of chrome used on the bike. The headlamp unit gets a small visor and gets an analogue instrument cluster behind it. Both the wheels only gets drum brakes and the disc brakes are not available even as optional features. 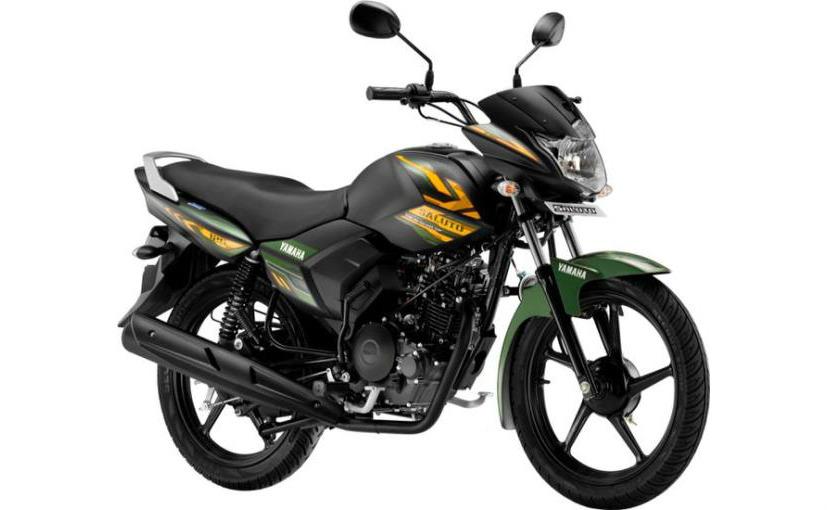 Yamaha launched the Saluto to replace the discontinued SZ-R. This Yamaha 125cc bike looks very stylish and modern. The bike looks very sleek. It gets chiselled fuel tank with extensions. The tank itself is quite angular and gives the bike a very interesting look. The Saluto also gets black paint finish on the lower half. It gets blacked out alloy wheels, engine and exhaust muffler. Even the rear spring based suspension is blacked out to give it a premium feel. The Saluto gets chrome battery cover that gives it a special appearance. The single seat of the bike has been curved in a way that pillion rider gets clear view of the front while riding.

Yamahas bikes are known for their reliable and smooth engines and the Saluto is no different. The bike is powered by a 125cc, single-cylinder, air-cooled engine that produces a maximum power of 8.2 Bhp and peak torque of 10 Nm. the engine is mated to a 4-speed gearbox and Yamaha claims that it returns a maximum fuel efficiency of 78 km/l. The engine gets Yamaha Blue Core technology that gives it good fuel efficiency and low end torque. Yamaha does not offer disc brake with the bike. Both front and rear brakes are drum brakes. 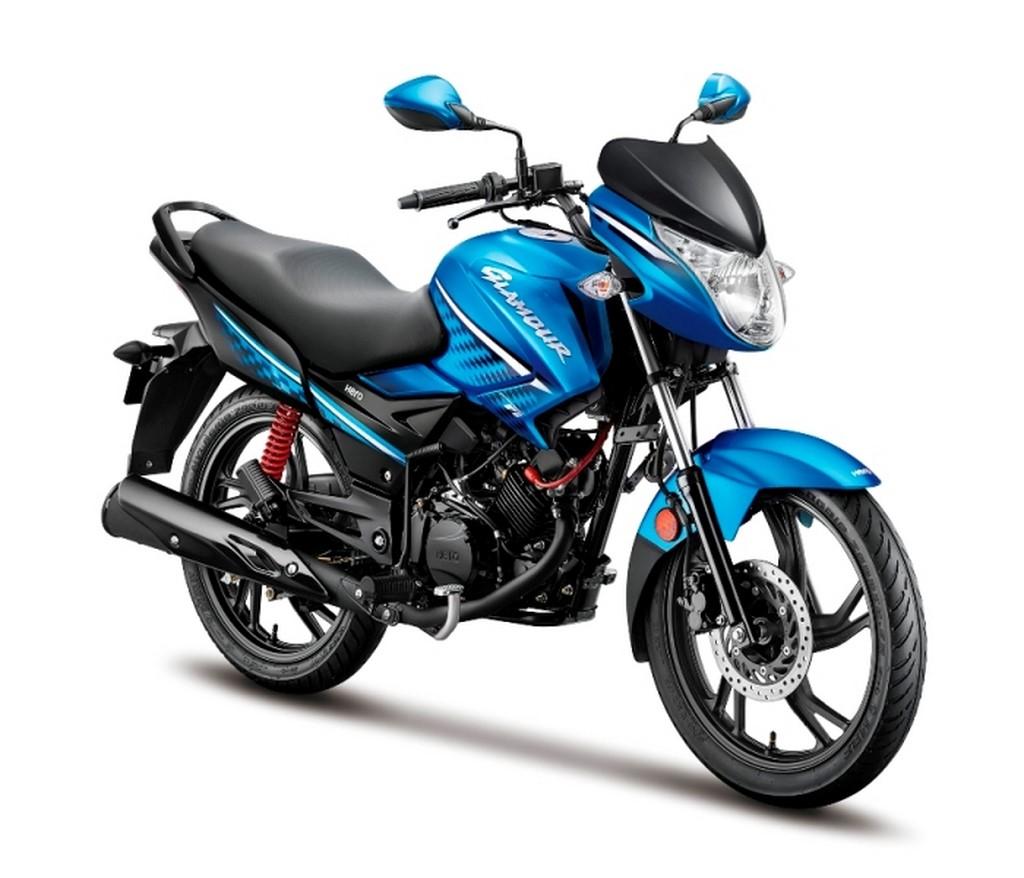 The Hero Glamour is one of best bike under 125cc segment. Hero Glamour is premium offering from the brand and it has been a continued success for the brand in India. The bike is one of the best looking bikes in the segment with tank extensions that really look good. The whole body gets complicated, chequered body graphics that makes the bike quite interesting. It also gets dual body paint job that gives it a black tank and different contrasting coloured tail. There are other highlights like red rear shock absorber and red cover on the spark plug cover. The exhaust system gets silver end that gives it a premium outlook. The bike gets front disc brake. There is also front telescopic forks and rear spring shock absorbers. Hero Glamour also gets digital console.

This hero bike is powered by 124.7cc, single-cylinder engine with a maximum output of 9 Bhp and 10.3 Nm peak torque. It gets a 4-speed gearbox. Hero claims an average fuel economy of 55 km/l. The bike is liked by people who upgrade from commuter segment bikes. 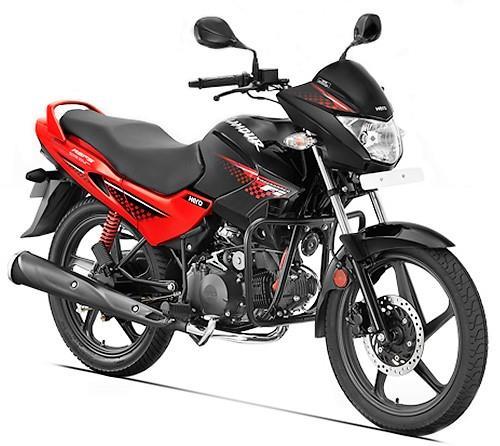 The Hero Glamour FI is the Fuel Injected version of the Glamour. The 125cc bike is the only fuel injected option available in the segment and it is quite advanced. The bike gets PGM-FI technology that is only significant change in the bike. It gets digital-analogue console too, which also looks quite cool. Apart from these changes, the decals are similar to the regular Glamour version with only change is the additional PGMF sticker that it gets. The bike gets same 124.7cc engine that generates a maximum fuel efficiency of 9 Bhp and peak torque output of 10.35 Nm. It gets a claimed fuel efficiency of 70 km/l, which is quite high. 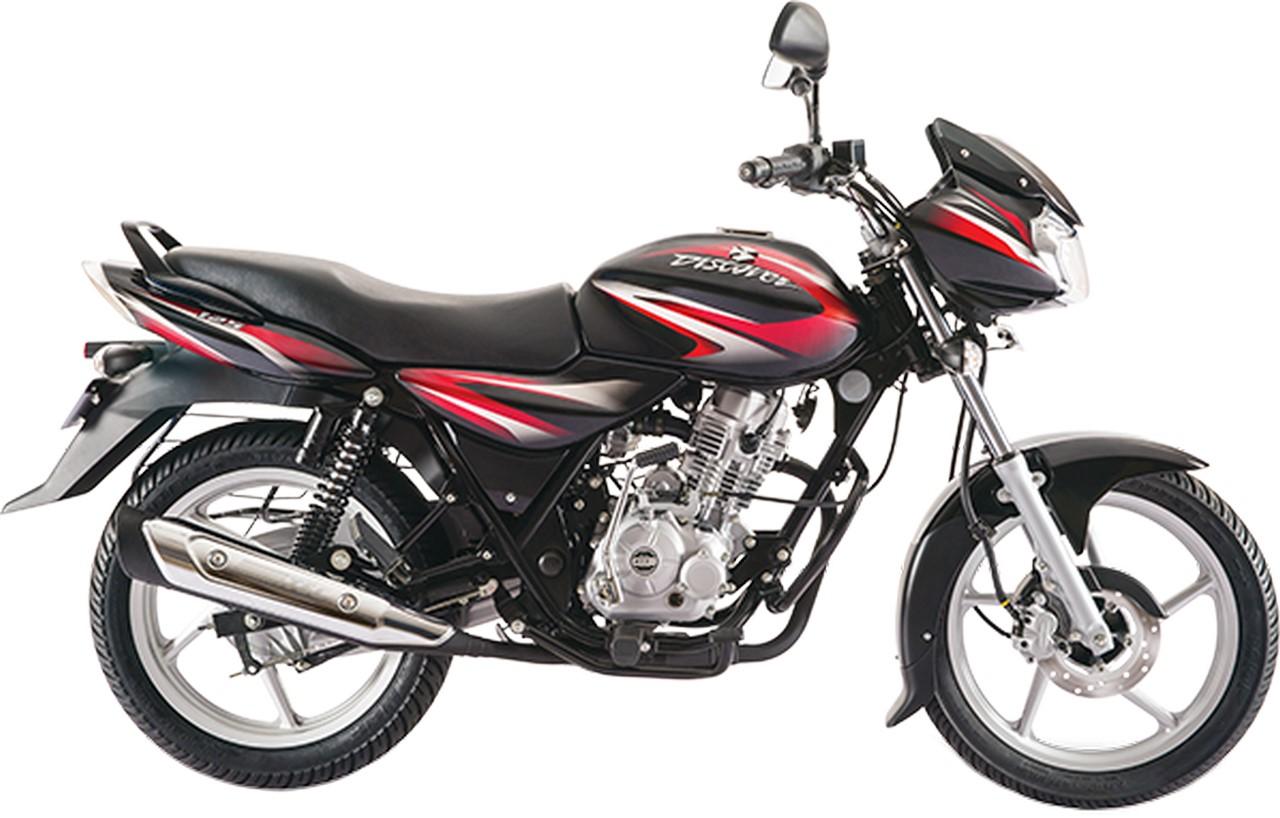 Bajaj launched the refreshed version of the popular Discover 125 in India recently. The Discover has been a long running name in the market and has earned a lot of trust from the customers. The Bajaj Discover receives slight updates for the 2018 version and looks quite interesting.

This Bajaj bike looks premium with a sharp headlamp unit, and bold body graphics. It gets chiselled and sleek fuel tank no extensions. The lower part of the bike consisting of the engine, muffler and the alloy wheels have been painted in black to give a very premium look. The exhaust muffler gets a chrome cover to add premium-ness to it. Bajaj has also integrated LED daytime headlamps on the bike Discover 125 that look really good now. The alloy wheels themselves are uniquely designed with branching out spokes. The bike gets optional front disc brake option and standard rear drum brake. Bajaj powers the bike with a 124cc engine that churns out a maximum power of 11 Bhp and 11 Nm of peak torque. The long stroke engine offers good low end torque. There is telescopic front shock absorber and dual spring loaded rear shock absorber that makes it quite comfortable too. Bajaj claims a high fuel efficiency of 82 km/l, best mileage bike in India 125cc, which is higher than most of the other bikes in the segment that’s why it is best mileage bike in 125cc category. 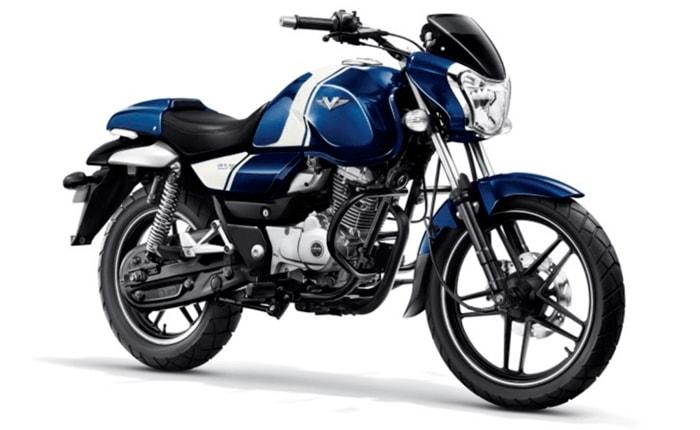 The Bajaj V15 became quite a success for the brand in India. After receiving a good response for the bike, Bajaj launched a new, scaled down version of the bike in India. The new bike, V12 carries the same design layout as the elder sibling. The V15 was marketed as the bike made up from the steel of INS Vikrant, a decommissioned aircraft carrier of the Indian Navy.

The Bajaj V12 also gets the same design as the V15.It gets a bulgy fuel tank with rounded headlamp. The 125cc semi-cruiser style bike gets a mini visor on the top of the headlamp and split seats too. There is telescopic front suspension system and gas charged twin rear suspension. It gets black alloy wheels and exhaust base colour. The only chrome dipped parts present in the bike are on the exhaust cover.  The bike only gets drum brakes instead of front disc brake that is available with the V15. The bike is powered by a 124.6cc, single-cylinder engine with a maximum power output of 10.6 Bhp and peak torque of 11 Nm. It gets a 5-speed transmission and a claimed ARAI mileage of 65 km/l. This is one of best bike in 125cc category. 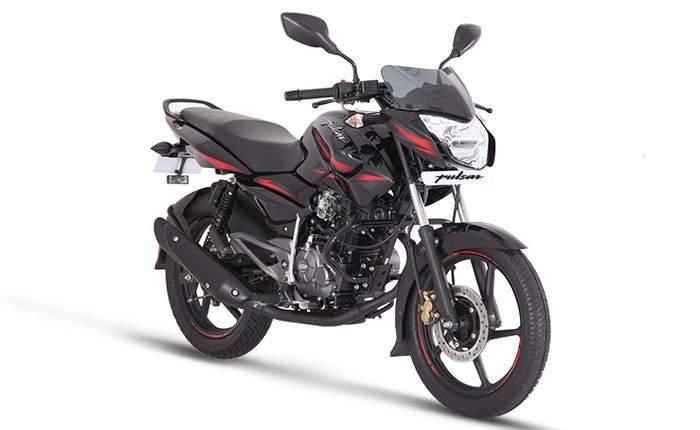 The Bajaj 135 LS is the most affordable Bajaj that you can get in the segment. The bike looks very advanced with angular fuel tank and a very aggressive headlamp set-up. It is also the only Bajaj Pulsar to get a kick start as standard. The bike gets a uniform body colour with streaks on it. The fuel tank also gets extension giving an aggressive outlook to the bike. The whole lower part of the bike gets black colour that adds to the aggressive outlook of the bike. Best 125cc bike in India for mileage and performance.

The bike gets front telescopic forks and rear gas charged shock absorbers. The Bajaj Pulsar 135 LS also gets front disc brake and rear drum brake. Bajaj also adds streaks to the alloy wheels that give it a very different and premium feel. This is the fastest and powerful bike in 125cc segment. 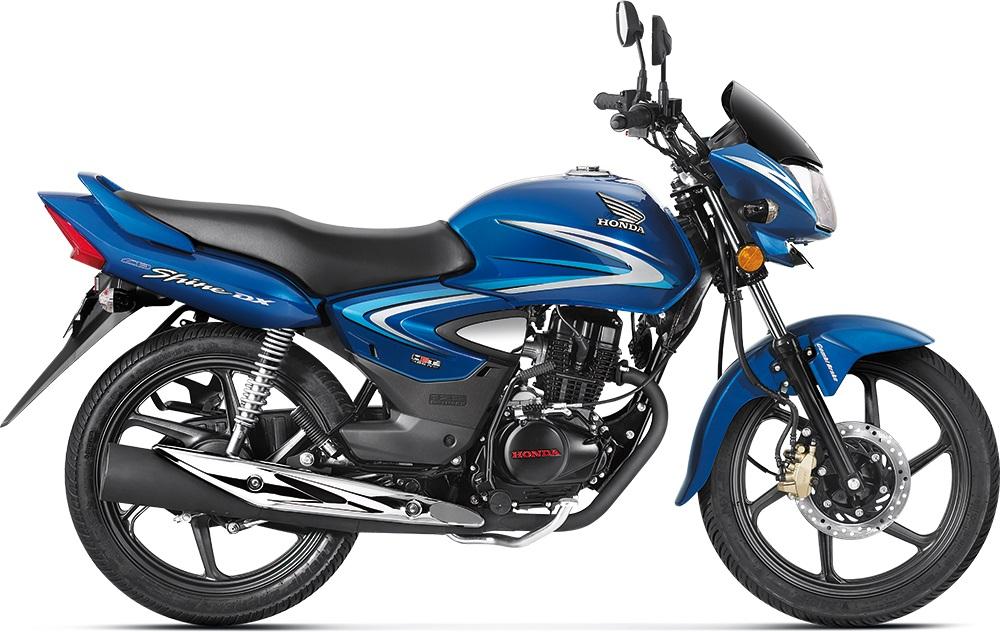 The Honda CB Shine is one of the best looking bikes in the 125cc segment and best bike for long drive. The bike gets bold graphics on the body that highlights it from the sea of other commuter bikes in the segment. The bike gets sharp headlamp with a small visor on it.

This Honda bike gets an all-black paint scheme which is spread from the engine to the 6-spoke alloy wheels and also the exhaust. It is quite a premium looking bike.

The premium commuter 125cc bike also gets disc brake at front and drum brake at the rear. There is telescopic front fork and spring loaded suspension at the rear. Honda powers the bike with 124.7cc single-cylinder engine that produces a maximum power of 10.16 Bhp and a peak torque of 10.30 Nm. It is coupled with a 5-speed gearbox. The engine also gets Honda Eco Technology or HET that leads to better fuel efficiency and better torque delivery.  And of course, the CB Shine is known for the immaculate smoothness that it provides. Honda claims that it returns a maximum fuel efficiency of 65 km/l. It is a best 125cc bike under 60000. 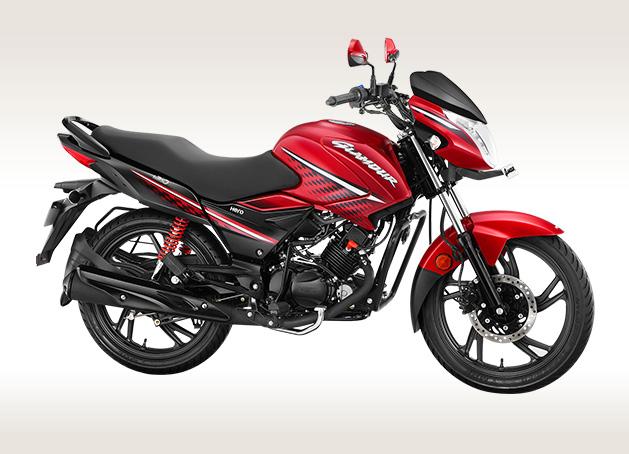 The Hero Glamour i3S is a premium version the Glamour. The Glamour i3S looks much sportier, funkier and is targeted at the young riders in the market. The Glamour i3S sure is a 125cc motorcycle but it gets heavier looks that makes it at par with the higher segment bikes. The Glamour i3S is one the best 125cc bikes in the market. It gets sharp, angled headlamp with a small black visor on top. The tank gets big shrouds giving it a much bigger feeling. The dual tone body paint scheme of the bike adds to the looks. The Glamour gets black treated engine, exhaust and alloy wheels. The wheels themselves are twin spoke and look quite premium. The bike gets front disc brakes and rear drum brakes.

The Glamour i3S is powered by 124.7cc, single-cylinder engine that churns out a maximum power of 11.4 Bhp and peak torque of 11 Nm. The i3S start/stop system is unique in the segment. It saves more fuel by automatically shutting down the engine when the engine is idling and then restarts it as soon as the clutch is engaged. Hero claims that the bike can do a maximum of 60 km/l. It is a best 125cc bike from Hero. 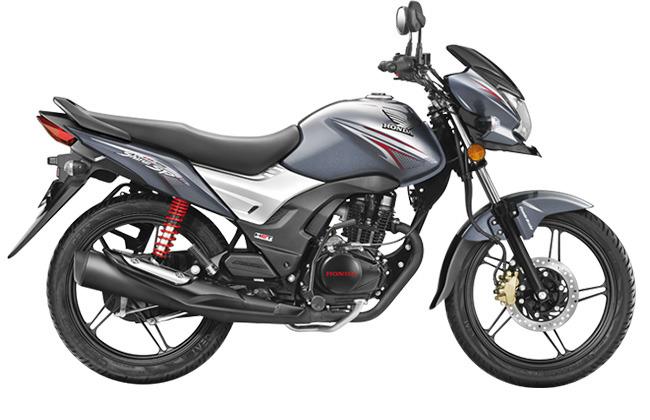 The Honda CB Shine SP is based on the Shine but the SP tag refers to the Special variant. It looks very stylish, thanks to the additional accessories that are added to it by Honda. The bike gets 5 dual spoke alloy wheel painted in black. Even the tank gets an extension that adds muscular looks to it. Honda has also given a very aggressive and bold body graphics to the bike. The only updates that seen on the CB Shine SP are visual and no mechanical changes have been done to it except a few additional features. The bike gets an electric start option alongside the kick start that is available with the Honda CB Shine. Honda also offers the revolutionary Combi-Brake System that is available with the Honda’s range of scooters and are very effective to bring the vehicle to stop quickly. This is one of best 125cc bike for long distance rides.

This Honda 2 wheeler has the same 124.7cc, single-cylinder engine that generates a maximum power output of 10.5 Bhp and peak torque of 10.3 Nm. The transmission remains the same 5-speed unit and it returns a maximum of 65 km/l. Best 125cc bike overall.